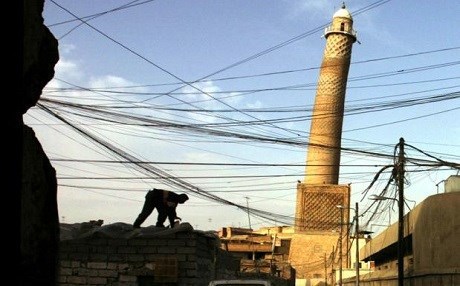 Another important cultural treasure, part of world heritage belonging to everybody and nobody at the same time, gone forever. The 800-year-old al-Nuri Mosque is lost.

The leaning minaret of al-Hadba (the Humpback) beside the Mosque has also been destroyed and will no longer grace the skyline of Mosul, northern Iraq because the entire complex has been blown up. Islamic State says it was the United States, the Iraqi government blames Islamic State, declaring that this act of wanton destruction is an admission of defeat.

If was from this mosque that the Islamic State leader, Abu Bakr al-Baghdadi made his only public appearance when declaring the creation of a Caliphate in July 2014.

The Mosque was ordered to be built by the Turkic ruler of Mosul and Aleppo, Nur al-Din Mahmoud Zangi, in 1172. Nur al-Din united the Moslems to fight against the Crusaders, capturing Damascus and preparing the ground for the success of his Commander, Saladin.