Presidential elections took place yesterday in South Ossetia. The turnout made up more than 80%. About 58% voted for Anatloliy Bibilov, current Chairman of the Parliament. 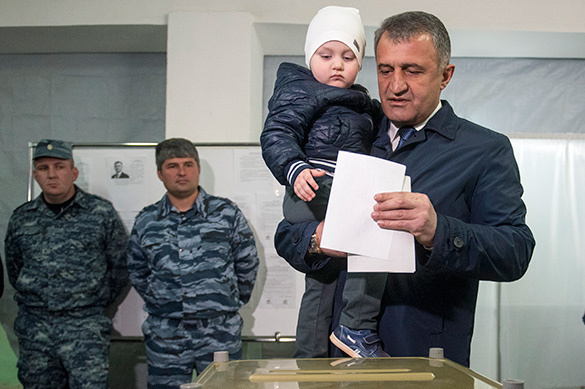 Future president of the Republic claimed that he intended to build-up relations with Russia.

Moreover, according to him, people of South Ossetia want to be part of Russia. As he said, talks on conduct of a referendum on the issue are being carried out with Moscow. Bibilov noted, that 'people of South Ossetia have had this wish to return into the Russian Federation since 1920s, when the Ossetian people were divided'.

There are different options for joining Russia. First, is establishing of a new entity of the South Ossetia Republic. It is possible practically, and the referendum was directed at this, when the name of state was changed into Alania.

The Republic of North Ossetia is also called as Alania. So, they may unite into one entity of the Russian Federation. However, less citizens of South Ossetia favour this option.

The problem is whether Russia will agree upon the Crimean scenario.

The question has really been raised several times. Just after the USSR collapsed, such mood has been already in the air. And South Ossetia had a status of an autonomous region within the USSR. That means its opinion should have been taken in to account. Unless people of South Ossetia wanted to exit, they would have right to define their fate given the Soviet legislation by themselves. Namely negligence of this right generated conflict between Tbilisi and Tskhinvali apart from other reasons. But that was in the 1990s. A lot of things took place then not under a legitimate scenario. And Ossetia had more abilities at the time to join Russia. Because all the neighbouring countries would recognize it de facto, and even de jure.

And now when Russia faced acute reaction from a whole range of states regarding Crimea and future sanctions, which certainly damaged to some extent economy of our country, it has to consider these circumstances. And I believe that the Russian political elite does not want to repeat the Crimean experience regarding South Ossetia. Otherwise, it would have been already applied regarding the South-East of Ukraine, Transnistria and South Ossetia.

And Russia does not recognize such possibility as a real in the nearest future. Having recognized independence of South Ossetia and Abkhazia though, the Russian political authorities believe that they have done maximum possible to provide security for people who live in these republics. The issue has been discussed at the highest political level though.

Step-up is connected with elections campaigns. All the latest campaigns have been carried out within acute political fight of different forces. But it related to the inner political situation only. While regarding foreign policy, people of South Ossetia have always been unanimous. Population of some dozens of people would not be able to oppose such a serious southern neighbour as Georgia. Thus, they want to unite.

It would be possible when Russia successfully copes with the current economic crisis and depends on outer creditors and investments no more.

Also read: Russia and Ossetia to unite their armies