Why NATO plays a game of Russian threat

The NATO has arrived in Poland not for exercises. The military of alliance carry out reconnaissance and choose grounds for defence, as the US Lt Col Steve Gventer, commanding the battle group, revealed. 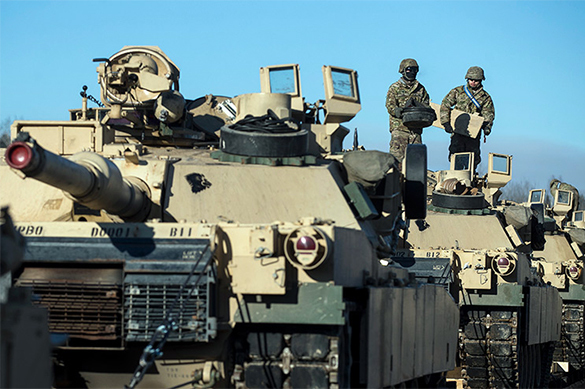 As Pravda.Ru reported, 1,300 military men arrived in Poland from Great Britain, the US and Romania. They are to 'form a wall of steel from Estonia, in the north, to Poland, to defend Nato territory from Russia, should President Vladimir Putin threaten invasion'.

Arsenal of the group is impressive. There are in particular 79 Stryker armoured vehicles, mortar carriers and mobile guns; 6 British Howitzer artillery pieces, 25 reconnaissance vehicles and other weapons.

Viktor Baranets, a military expert, retired Colonel, has told Pravda.Ru why the US is getting ready for a Russian invasion, deploys army along our borders and talks about Russia's being aggressive.

We knew about deployment of these groups long ago, as well as battalions of 1,000 men each in the Baltic states. And Poland is starting to cry most of all, asking NATO for defence from the Russian threat.

Cunning Poland wants to live for free, as the other NATO countries: to pay less for their army, to pay less than they should according to the NATO Charter. It hides under the US skirt, and the US willingly takes it.

Myth on the Russian military threat makes Pentagon equip NATO's allying armies with old stuff, which is coloured and dolled up. Thus, this stuff goes from the North American continent to the European one. The US military industrial generals applaud for this. Then new orders are sent from the US Defence Department, and these generals become more rich.

Another moment should also be taken into account. The new NATO doctrine presupposes creation of the so-called forward-deployed units. These are present groups, battalions, armoured equipment in Europe. NATO wants to have a huge quantity of armoured equipment at the Russian borders, so that the US, German, French specialists may take this equipment and continue combat acts when needed. Now they are deployed in Poland. NATO plays a game of a Russian threat and we just smile at this.

Nobody provides photo, video or any other documents which would evidence this made-up Russian aggression. They work on pure propaganda, and nobody in the world dares to be indignant at this.

And it would be doublespeak if I tell you that the Russian Defence Ministry, the Kremlin and the General Staff do not mind. We are on the brink of the second Cold War. We can evidence this concentration of units. Of course, we react. That is why the First Tank Army has been restored, as well as the legendary 150th Division, fighters of which raised a flag over the Reichstag.

Namely to oppose build-up of the NATO forces at the western political direction, Russian frontiers have been reinforced. That also generated deployment of the Iskanders - mobile short-range ballistic missile systems in the Kaliningrad region. They try to interrogate out diplomats, politicians, military. But they have nothing to present. The Kaliningrad region is part of the Russian territory, which will be defended by our army as any other corner of the Russian land.