In Mosul market on fire because of shelling. Video

Great fire has taken place in the city of Mosul. A market in the Eastern part of the city - which was liberated from the IS - has been shelled from mortars. The Iraqi authorities are not able to report who is behind the shelling. 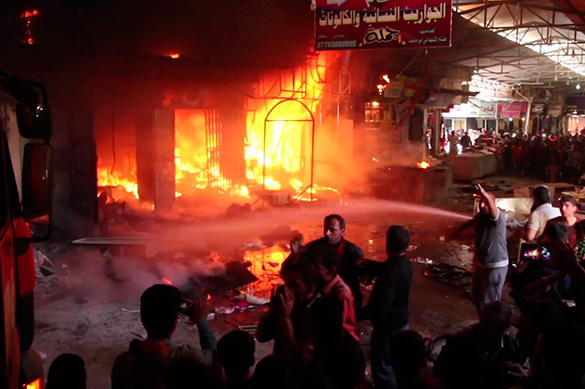 Moscow, in its turn, has requested a special briefing at the UN Security Council on death of peaceful residents in Mosul because of bombing. According to the Foreign Minister Lavrov, Moscow stands for liberation of the Iraqi city of Mosul, but acts of the US coalition should be more precise.

'First of all, we have kept a close eye on operation on liberation of Mosul from the very beginning. Because we keep in mind how some Western colleagues pressed us during liberation campaign in the Eastern Aleppo. And Mosul is a much bigger agglomeration rather than the Eastern Aleppo,' Lavrov claimed.

Moscow is interested in Mosul being liberated from terrorists, Lavrov noted. 'We have taken an initiative in the Eastern Aleppo, which let us save a lot of lives, as corridors were organized via which all the fighters could exit. Many of them made use of this ability and made it not necessary for us to apply armed forces to liberate this part of the city,' he said.

'We consider that the same correct, careful, responsible approach will be used in course of future acts of the coalition in Mosul,' Head of the Russian Foreign Ministry stated.