Only 5-year-old girl alive after US airstrike in Mosul

Only a 5-year-old girl Havraya has remained alive after the US airstrikes in Mosul. She could not have been delivered to hospital for three days because of fighting. The girl is badly burnt, she is in serious condition. 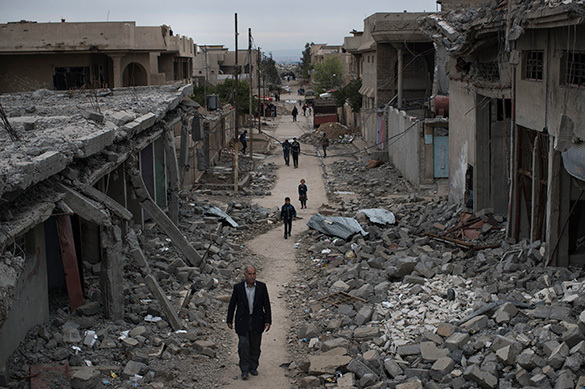 When a bomb struck the house, three more people were inside, including a mother of the girl. Everyone died.

As the Russian Defence Ministry reported, about 180,000 people are blocked in the Western Mosul. Fighting is going on with appliance of heavy weapons. It is known that the US and its allies actively use aviation, as well as the B-52 strategic bombers. No humanitarian corridors have been created yet.

Another resident of Mosul, mother of a 10-year-old boy, has revealed that as a result of the coalition's airstrike, they lost their house and had to flee. Sniper shelled the family, while the man stepped on a mine. Debris killed their son, the man was wounded.

The number of refugees from Mosul, which has been stormed by coalition troops since October, has exceeded 400,000 people.

Cases of interfaith violence also happen in Mosul - fighters of the Shia groups within the coalition settle accounts with local Sunni population.

The Russian Military Department believes that future offensive against the ISIS 'capital city' Raqqa will also lead to dire consequences for peaceful residents. According to the UN data, after the Kurdish groups shut off Raqqa's land connection with neighbouring regions, significant deficit of goods can be experienced in the city.

There are also water and power supply shortages as a result of air strikes, a bakery and two hospitals, which hosted 4,200 patients a month, were destroyed. The number of closed medical facilities reached 19. Since November 2016 the number of refugees from Raqqa made up 42,000 people. Strikes of the coalition hamper people from moving.