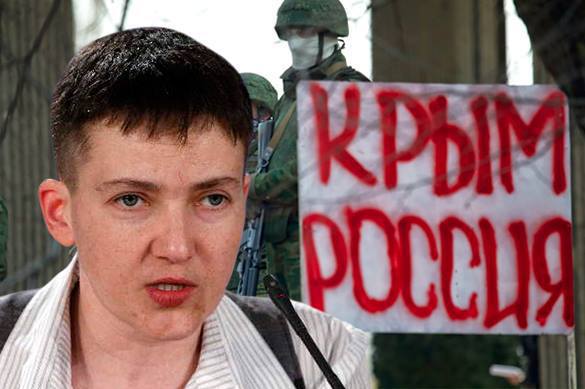 Nadiya Savchenko continues making loud statements upon her return to Ukraine.  During her recent press conference, the Ukrainian military pilot, who was pardoned in Russia for her involvement in the murder of two Russian journalists, stated that World War III would help return Crimea to Ukraine.

"I had a feeling that WWIII could happen, and I still have this feeling. Crimea will probably return to Ukraine during this world war. If the war does not start, one will have to reach people and explain to them that they have made a mistake that should be corrected," said Savchenko.

Ukrainian President Petro Poroshenko has also made quite a number of statements about WWIII. However, he has recently confessed that he wanted to cease hostilities in the Donbass. Allegedly, he believes in the peaceful settlement of the situation in the south-east of the country.

Nadiya Savchenko was exchanged for two Russian citizens - Yevgeny Yerofeyev and Alexander Alexandrov - on May 25, 2016. Vladimir Putin and Petro Poroshenko had signed decrees to pardon them.

Citizen of Ukraine Nadiya (full name Nadezhda) Savchenko was sentenced to 22 years of imprisonment in a penal colony for the murder of VGTRK journalists in the Donbass.

The court established that on June 17, 2014, Savchenko was staying in the area of the deployment of Aidar battalion, where she was conducting covert surveillance and correction of artillery fire on a checkpoint of Luhansk militia where civilians were also staying, including three Russian citizens, VGTRK journalists. Two of them, Igor Kornelyuk and Anton Voloshin, were killed by gunfire.