British Foreign Secretary declares Russia "threat to all of us"

Russia's behavior on the international arena is threatening and challenging, British Foreign Secretary Philip Hammond said, speaking at a press conference in Georgia. 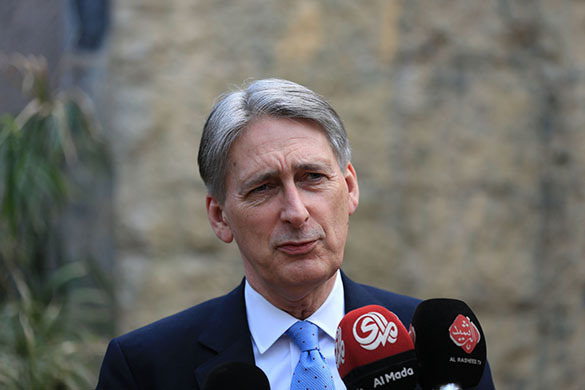 "Russia ignores the norms of international conduct and breaks the rules of the international system. That represents a challenge and a threat to all of us," he said.

Hammond also said that Britain would be committed to the restoration of the territorial integrity of Georgia. According to him, the status of the breakaway republics of Abkhazia and South Ossetia remains unresolved.

"We have not forgotten that the conflicts in Abkhazia and South Ossetia remain unresolved. The UK is committed to supporting Georgia's independence and territorial integrity. The UK has always been clear that countries like Georgia should be able to make their own sovereign choices about their futures, free from outside interference," Hammond said.

The British authorities seem to be obsessed with criticizing Russia. British officials bash Russia for its reunification with Crimea, for the deployment of the military contingent in Syria at the request of the legitimate Syrian government, as well as for the withdrawal of the Russian troops from Syria.

Noteworthy, both the British and the US administrations turned a blind eye on the liberation of the pearl of Syria, the ancient city of Palmyra. The Syrian government army with the support of the Russian forces has squeezed Islamic State terrorists from the city.

To crown it all, the British forces were involved in the military operation in Syria last year without having either an agreement from Damascus or the UN mandate for the war actions in the Arab Republic. The British Parliament did not authorize the air raids either, but Mr. Hammond was not protesting about it.