Ukraine: Kolomoisky steps out of shadow, goes on offensive

The head of the Dnipropetrovsk Regional State Administration, Ukrainian oligarch Igor Kolomoisky, ordered his battalion Dnepr-1 to take the building of Ukrainian oil company Ukrnafta on Sunday, March 22. Kolomoisky goes on the offensive before the election in the United States. After his masters take the White House, Poroshenko will be destroyed. 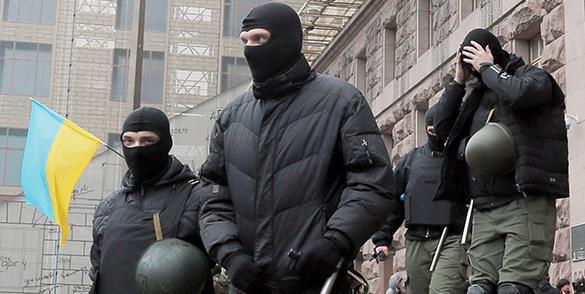 Two days earlier, on March 20, the Ukrainian oligarch captured the building of the state-run company Ukrtransnafta. He stated that he wanted to confront raider attacks of "Russian occupiers". In both cases, he was extremely rude and arrogant while talking to his opponents in front of cameras.

Noteworthy, Ukrnafta is the largest oil and gas company of Ukraine. Fifty percent of its shares plus one share belongs to state-run company Naftogaz of Ukraine, while Kolomoisky-owned Privat Group controls 42 percent of its shares. Ukrtransnafta is a company that operates oil pipelines. One hundred percent of the shares of Ukrtransnafta belong to the state through Naftogaz of Ukraine. For many years, the company had been staying under the management of oligarch Alexander Lazorko, who was loyal to Kolomoisky, thus creating favorable conditions for Privat Group. Poroshenko tried to replace Lazorko, but failed. As a result, President Poroshenko reprimanded Kolomoisky for violating the rules of professional ethics. In response, Kolomoisky blocked Poroshenko's accounts at Privatbank.

Afterwards, the Verkhovna Rada of Ukraine amended the Law on Joint Stock Companies, lowering the quorum for a meeting of shareholders to 50 percent plus one share. Ukrainian MPs did not try hide the fact that the adoption of the law had a direct impact on the arrival of 1.7 billion hryvnia in the budget as dividend from Ukrnafta. Kiev tried to take control of the one of the key companies of Ukraine by holding a meeting of shareholders, which Kolomoisky had sabotaged.

Enraged with yet another attempt on his business, Kolomoisky headed the armed capture of Ukrnafta. Even Ukraine's Energy Minister Demchishin, who went to the scene of the incident, was forced to retreat. Kolomoisky threatened all those present that he had 2,000 fighters at his disposal, who would be in Kiev the following day because his companies were being taken away from him. According to Ukrainian media, Kolomoisky "ignored the warning from US Ambassador Geoffrey Pyatt, who said that the laws of the jungle were long gone.

"After the truce in the southeast of Ukraine came into force, the degree of political confrontation moved to the center in Kiev. Now it is mainly concentrated around the Ukrainian government and five or six Ukrainian oligarchic groups, - Ruslan Bortnik, Director at the Institute of Policy Analysis and Management (Ukraine) told Pravda.Ru. - These conflicts are very sharp, and the farther they go, the more they will exacerbate as oligarchic groups compete around very limited and rapidly shrinking financial and economic resources of the country."

Kolomoysky has ruined his ties with all other financial and industrial groups of Ukraine, the expert said.

Why is Kolomoysky so bold and arrogant?

This is because Kolomoisky, like Poroshenko, has his patrons in the United States. It goes about the war party of the Republicans sponsored by Goldman Sachs. Blog human_rights_politican_journal.wordpress.com writes that PMC Blackwater or Academi that trains and fights for Kolomoisky, is funded by Monsanto - Vangurd Group - Goldman Sachs, and this whole chain is linked to the CIA. Goldman Sachs is one of the major sponsors of the Republicans. According to Russian researcher Tatiana Volkova, Kolomoisky has the support of Vangurd Group and the Clinton-McCain War Party, while Poroshenko enjoys the support of Obama's "peace party." "The main part of the stable income in Ukraine comes from PMC Academi that belongs to Vanguard-controlled Monsanto since last year. Thousands of its Russian-speaking soldiers in Dnepr battalion uniforms service Kolomoisky, thousands of others, wearing uniforms of Sokol special units of the Interior Ministry, service the Kiev government," wrote Tatiana Volkova. Monsanto will lose hundreds of thousands of dollars, if the war in Ukraine ends one day earlier, and billions - if it ends a month earlier. They do not ask infantile "who won?" questions there, the author notes.

American journalist and blogger John Helmer conducted his own investigation and concluded that Marek Dabrowski, one of Europe's leading monetarists, when a member of the monetary council of the National Bank of Poland, and Leszek Balcerowicz, as its president, lobbied for Kolomoisky's Privatbank to obtain a Polish banking license for the Ukrainian bank. From the Poles, the track goes to the United States, as the two Polish officials were the architects of Polish reforms based on the American neo-liberal model. Kolomoisky has a lobby in Germany too. For example, Gunther Scholz of Der Tagesspiegel and forces behind him. Scholz said that the capture of Slavyansk and Kramatorsk was Kolomoisky's achievement. According to the journalist, the president of Ukraine must share power with Kolomoisky, who, according to Scholz, will become Ukraine's next president.

Having such forces behind his back, Kolomoisky stepped out of the shadows and went on the offensive. Unlike Poroshenko, he estimates situations from a real point of view. "Let's look at the situation from the side of DPR and LPR. They conducted a pseudo vote over there with Zakharchenko and Plotnitsky winning, - said Kolomoisky on March 22 in an interview with TSN. - They now are the power there. I am not certain that should they hold elections under the Ukrainian law there now, people won't vote either for Zakharchenko or Plotnitsky," Kolomoisky said.

He also noted that the two breakaway people's republics have materialized as entities of Ukraine: "We have two entities that we do not recognize it - they are People's Republics of Donetsk and Luhansk, but they have established themselves, much to our regret. They exist," Kolomoisky said.

For the time being, Kolomoisky does not perform the ideological order of the US State Department for the "unitary Ukraine." His goal is much more prosaic - money. Yet, he has a disadvantage. Should Kolomoisky take Kiev, as he predicts, he will not be legitimate in the eyes of the West. There is not too much time left to wait. The 2016 presidential election in the United States will end with the victory of either "hawk" Hillary Clinton or a Republican candidate.

Noteworthy, Poroshenko, is not attached only to the US budget. He gave shale deposits in Ukraine's southeast to Shell, the Strategic Culture Foundation said. This organization is related to the Deutsche Bank and the Rothschilds. Josef Ackermann, former CEO of Deutsche Bank, is the director of Shell.

The war between two pro-American oligarchs will continue. Those who control the war in Ukraine are associated with financial flows from the West and diplomatic support of the "free world."

Poroshenko's prime goal is to prove that he is useful to the "war party" in the United States, then there is a chance for him to stay in power. For the time being, he loses the fight. In the near future, possibly, Ukraine's Verkhovna Rada will pass the law to nationalize Privatbank. How will Kolomoisky respond? Will he go to war? Why not conducting negotiations with the DPR and LPR? That would be great PR for him in the West. It should be understood that these two oligarchs can be easily removed from power, if Washington decides to freeze their accounts in Western banks.

Read the original of the article on the Russian version of Pravda.Ru