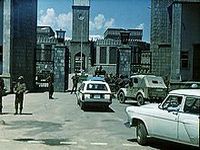 Ashmat Khlil Karzai, the cousin of Afghanistan President Hamid Karzai has been killed this morning in Tarz District by a suicide bomber who was hiding explosives inside his turban.

The suicide bomber activated his explosive turban when he walked up to greet the victim, a supporter of Ashraf Ghani Ahmadzai's Presidential application, after morning prayers outside the Karzai family home. In 2007, President Karzai's brother, Ahmad Wali Karzai, was assassinated in Kandahar.