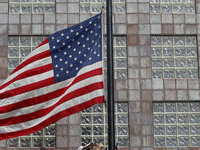 Tuesday was quite the day for Ed Markey to join the Senate.The former congressman from Massachusetts was sworn into the upper chamber on Tuesday morning after more than three decades in the House - and as negotiations hit a fever pitch between Senate leaders to avoid the nuclear option - a major change to the chamber rules governing President Barack Obama's executive nomination, according to Politico.

Vice President Joe Biden delivered the oath to the new senator with Senator Elizabeth Warren and William "Mo" Cowan by his side. Cowan served as the interim senator after President Obama nominated Kerry to become the country's top diplomat, says MSNBC.

Markey had served in the U.S. House since 1976. He won the special election to replace U.S. Secretary of State John Kerry in the Senate, informs Patch.com.