Weekend protests in Egyptian capital lead to at least 13 deaths 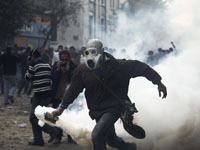 At least 13 people died and hundreds were injured over the weekend as troops launched a major assault to clear Cairo's Tahrir Square of protesters.
The unrest casts a shadow over elections due to start next week.
It is the longest continuous protest since President Hosni Mubarak was ousted in February.
Demonstrators say they fear Egypt's governing Supreme Council of the Armed Forces is trying to retain its grip on power.
Calls for his resignation could be heard during the weekend's protests, says BBC News.

About 3,000 protesters are on the square, facing off with hundreds of black-clad riot police firing tear gas and rubber bullets.
Monday's clashes are also taking place near the Interior Ministry, which is close to Tahrir Square - the epicenter of the uprising that toppled President Hosni Mubarak in February.
The protests have spread across much of Egypt. Hundreds have been wounded, informs USA Today.

The protests were an eruption of anger that started with a peaceful march by tens of thousands of Islamists on Friday. When security forces tried to clear a small tent city that remained in the square on Saturday, a far more diverse cross section of young people and professionals turned out in support, battling the police in a war of rocks and tear gas. By Sunday, the clashes had spread to at least seven other cities, including the major population centers of Alexandria and Suez.
A makeshift field clinic that protesters had set up in a mosque near Tahrir Square treated a steady stream of hundreds of bloody patients on Sunday, registering at least one death, and doctors said they treated some wounded by live ammunition instead of the rubber bullets and birdshot that the security forces primarily used. After dark, a dead body was paraded on a stretcher through the square as battles continued around the periphery. More than 1,000 people were reported seriously injured over the past two days, says New York Times.

But analysts say a surge in violence in voting, a common feature of elections in Mubarak's era of rigged polls, could undermine the assembly's legitimacy if the result is questioned and deepen public frustration at the army's handling of the transition.
Presidential hopefuls Mohamed ElBaradei and Abdallah al-Ashaal denounced violence against protesters and called for a national salvation government, state news agency MENA said.
Liberal groups are dismayed by the military trials of thousands of civilians and the army's failure to scrap a hated emergency law. Islamists eyeing a strong showing in the next parliament suspect the army wants to curtail their influence, reports Telegraph.co.uk.

Islamic fundamentalist parties - particularly the powerful Muslim Brotherhood - are expected to come out the biggest winners in the vote and grab a plurality of parliament seats. But no matter who wins, there are doubts whether the next government to be formed will be strong enough to challenge the ruling generals, who will remain in place and have resisted major reform.
When a president is elected - a vote is initially set for late next year or early in 2013 - the occupant of the land's highest office is likely to be beholden to the generals, either because he will have a military background or because they may by then have more sweeping powers than him, according to Washington Post.