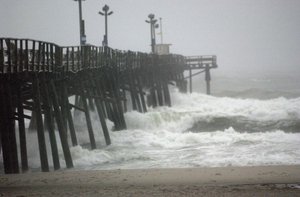 Taiwan downgraded Nanmadol to a tropical storm after evacuating people in its path, shutting schools and warning of heavy rain, flooding and mudslides after the typhoon made landfall early this morning.

Sustained winds weakened to 101 kilometers (63 miles) per hour, with gusts of 126 kilometers per hour, from winds of 119 kilometers and 155 kilometer-per-hour gusts reported earlier, the Central Weather Bureau said on its website. The storm's center hit southern Taiwan, with no immediate reports of deaths.

Nanmadol, which was downgraded to a tropical storm from typhoon at 8:30 a.m. local time today, was the first typhoon to hit Taiwan this year. Typhoon Megi last year killed 36 people, while more than 600 died in 2008 when Morakot struck, prompting the premier and cabinet to resign over their handling of the disaster. Most deaths were in mountainous regions, informs San Francisco Chronicle.

In China, Vice Premier Hui Liangyu ordered local governments to take steps to limit damage from the storm, which is expected to hit Fujian province sometime during the morning on Tuesday, the China Meteorological Administration said on its website (www.cma.gov.cn).

Officials must inspect dams, road and railway embankments to ensure they can deal with the expected heavy rain, the official Xinhua news agency said. Some 2,000 boats have returned to harbour to ride out the storm.

Storm tracking service Tropical Storm Risk currently rates Nanmadol as a tropical storm, and sees it weakening further to a tropical depression over the next 48 hours, says Reuters Africa.