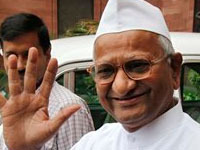 Government officials grant Anna Hazare the right to continue his anti-corruption fast for up to two weeks at a large venue.

A popular anti-corruption activist who was arrested this week and refused to leave his prison cell until India's government met his terms for a hunger strike left prison Friday morning to a triumphant welcome from thousands of supporters, some of whom have camped out for three days.

"Victory to mother India," said septuagenarian activist Anna Hazare, waving an Indian flag. "The fight is far from over, it has just begun."

The end of the unusual standoff occurred when government officials granted him the right to continue his protest for up to two weeks at a large venue, rather than three days at a smaller field they'd originally insisted on. His protest began in jail, reports Los Angeles Times.

"Long live the revolution," Hazare said before climbing into the back of a truck that led a slow-moving procession to the parade ground in the centre of Delhi where he plans to fast. Hundreds followed on foot.

"The government will have to bend in front of this movement," said one of Hazare's supporters, Prakash Khattar, a bank employee. "This is just the trailer, the film is yet to start", says The Guardian.