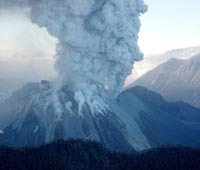 The ash is spreading towards the UK in a giant crescent shape with the horns pointing south, which will approach the eastern edge of Ireland and enter northern Russia by the end of today.

Airspace over Iceland - an important section of transatlantic routes - and the country's main airport are likely to remain closed for the rest of Monday as conditions failed to improve overnight.

Grimsvoetn, Iceland's most active volcano at the heart of its biggest glacier, began erupting late on Saturday, sending a plume of smoke and ash 12miles high, according to.

Experts, however, say there is little chance of a repeat of last year's six day closure of airspace when another Icelandic volcano erupted, although airlines have been warned the new ash cloud will drift.

So far, Iceland, particularly the towns and villages to the south and east of the Grimsvotn volcano, have suffered most. The thick cloud of ash has drifted over the capital Reykjavik, forcing the closure of the main international airport.

With winds currently blowing the ash northwards, authorities say there is little risk of any further disruption to European or transatlantic airspace over the next 24 hours. Last year's volcanic eruption cost the airline industry around 1.2 billion euros in revenues, says.