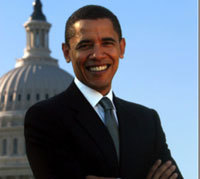 The Obamas donated $245,075 to charities, according to a copy of their 2010 tax form released by the White House on Monday, the deadline for filing tax returns, according to .

The White House said proceeds from the sale of the president's books account for most of the Obamas' income. Obama's annual salary as U.S. president is about $400,000. The Obamas paid about $450,000 in federal taxes, and donated more than 14 percent of their income to 36 different charities last year.

Monday is Tax Day in the United States, the last day to file federal income tax returns or apply for an extension.

Post offices throughout the country are often busy with filers who are rushing to mail the documentation and any payment by the deadline. Filers can also submit forms and payment electronically.

April 15 is traditionally the federal tax deadline, but Washington, D.C., where the federal government is headquartered, marked a holiday -- Emancipation Day -- on Friday, so the deadline was moved to Monday, reports.