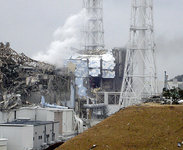 The fresh fire broke out at reactor no. 4 in Fukushima atomic power plant where three of the total six reactors were hit by explosions following last week's earthquake. The emergency workers at the plant had to temporarily withdraw from the plant.

People living near Japan's stricken Fukushima nuclear plant were told to leave, but emergency workers were struggling to cool the plant and a media report Wednesday said they could be left with lifelong health problems or even die.

Most emergency workers were evacuated Tuesday and about 50 remained inside the plant. They too left the plant Wednesday. A government spokesman said the inner shell in a reactor might be damaged and radiation was so high there that employees could no longer enter the complex.

A day before Prime Minister Naoto Kan had said that radiation levels around the damaged nuclear plant in Fukushima had "risen considerably" and it could endanger human health, TwoCircles.net reports.

Chief Cabinet Secretary Yukio Edano said the workers, who have been dousing the reactors with seawater in a frantic effort to stabilize their temperatures, had no choice but to pull back from the most dangerous areas.

"The workers cannot carry out even minimal work at the plant now," Edano said, as smoke billowed above the crippled Fukushima Dai-ichi nuclear complex. "Because of the radiation risk we are on standby, "according to News1130.

Radiation levels in Tokyo, one of the world's most populous cities, rose 10 times above average on Tuesday evening, spreading fear among many of the 33 million residents in the metropolitan area.

The best advice experts could give them was to stay indoors, close the windows and avoid breathing bad air -- steps very similar to those for handling a smog alert or avoiding influenza, according to Reuters.