Female police chief in Mexico asks for asylum in USA 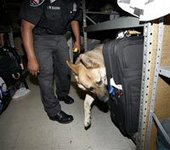 A woman who took the job of police chief in a border town riddled with drug gang violence has asked for asylum in the United States, officials said Tuesday.

The woman, Marisol Valles García, who was 20 when she was named police chief of Práxedis G. Guerrero in October, left with her whole family, including her baby son, last week, said Gustavo de la Rosa Hickerson, a Chihuahua State human rights investigator, according to New York Times reports.

Valles had gained worldwide attention after accepting the post in the town of Praxedis G. Guerrero in October. In Mexico, the press hailed her as the country's bravest woman.

Gustavo de la Rosa Hickerson, the ombudsman, said a Praxedis town employee told him Valles had crossed into the United States through Fort Hancock on Wednesday. De la Rosa said he does not know whether Valles is seeking asylum in the U.S., El Paso Times reports.