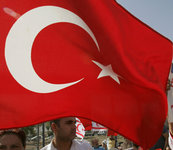 Several generals have been suspended by Turkey's government in the latest episode of a power struggle between the ruling party and the military.

Reports say a decision by politicians to remove officers of such high rank from duty is a first in the Turkish Republic, euronews reports.

The generals have opened cases at the country's top military court to contest their suspension, Hurriyet said, Bloomberg says.