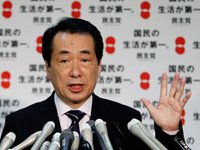 "Given how important the prime minister's visit [to the islands] is, it must be considered seriously. At the moment I do not have any concrete plans," Kan said in a speech to the Japanese parliament, according to RIA Novosti.

Tokyo wants the islands of Etorofu, Kunashiri and Shikotan and the Habomai islet group back. The long-standing dispute has prevented Japan and Russia from signing a postwar peace treaty.

Takahashi led a delegation visiting Kan to request that the central government speed up efforts to secure the return of the territory.

Kan said the negotiations with Russia over the islands are "not easy" given the history surrounding the territorial dispute, but Tokyo will address the matter from a "strategic standpoint."

During their meeting, Takahashi urged Kan to show "strong leadership" on resolving the issue, as the "environment has dramatically changed" with Medvedev's Kunashiri visit.

Medvedev visited Kunashiri on Nov. 1 despite Japan's earlier warning that such a trip could affect bilateral ties, The Japan Times reports.