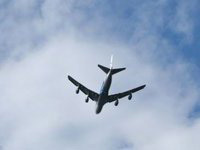 Countries including Britain and Germany have tightened air security measures amid fears about the safety of cargo after two US-bound parcel bombs were sent from Yemen in an alleged Al-Qaeda plot.

London announced Monday that it was suspending all unaccompanied air cargo from war-torn Somalia, extending a ban on freight from Yemen imposed after the devices were found on planes last week in England and Dubai. Berlin extended a ban on air freight from Yemen to cover passenger flights originating in the Arabian peninsula country. The bomb discovered in England passed through Cologne, Germany, AFP says.

In London, Home Secretary Theresa May said the U.K. will prohibit unaccompanied air freight from both Yemen and Somalia and stop some printer cartridges from going on flights.