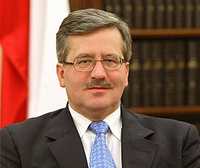 The tally by the Polish National Electoral Commission official web page shows Komorowski with 52.6 percent of the vote to 47.4 percent for Jaroslaw Kaczynski. Kaczynski is the twin brother of President Lech Kaczynski, who was killed in a plane crash in April, CNN reports.

A victory for Komorowski, 58, would give his Civic Platform party control of the presidency and cabinet, ending divisions that arose under the late President Lech Kaczynski, Jaroslaw’s identical twin brother, who died in an April 10 plane crash.