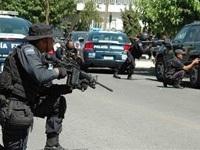 While a prison riot between rival gangs in north-western state of Sinaloa left 29 inmates dead, a dozen police officers were killed in an ambush by suspected drug cartel gunmen in the western state of Michoacan, both home to rival drug gangs that have been fighting turf wars and battling security forces, RTTNews informs.

The federal government confirmed the police deaths and said an unknown number of the assailants were killed.

Michoacan, the home state of President Felipe Calderon, has emerged as a key battleground as the cult-like La Familia cartel fights other gangs and security forces for control of the mountainous state, Reuters reports.