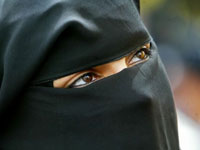 The move by the French government comes three days after a French parliamentary report called for a ban on the full veil. The report claimed that "Muslim women who fully cover their heads and faces pose an unacceptable challenge to French values," Press TV reports.

Legislation to stop Muslim women wearing the hood and other full-face veils such as the niqab will be introduced, equal opportunities minister Mara Carfagna said.

France is already considering outlawing burqas and Miss Carfagna believes other European countries will follow suit. She said: 'This is about a sacrosanct battle to defend the dignity and rights of immigrant women.

"A law is being studied that would ban the use of a burqa and niqab, which are not religious symbols - that's not us saying it, but the top religious authorities of the Islamic world, like the imams of Cairo and Paris, Daily Mail informs.

France is home to Europe's biggest Muslim minority but the sight of fully-veiled women remains rare. Only 1,900 women wear a niqab, 90 percent of them under 40, according to interior ministry estimates.

Supporters of a ban argue that the full veil is being pushed by radicals in the French Muslim community, but critics say the wearing of the garment remains marginal and warn a ban risks stigmatising France's six million Muslims.

President Nicolas Sarkozy set the tone in June when he declared the burqa "not welcome" in France, according to France24.