Today British Prime Minister Gordon Brown said a new global climate treaty had been "held to ransom" by some countries opposed to a deal in Copenhagen, and called for reform of the way such negotiations take place, including an international body to handle environmental stewardship. 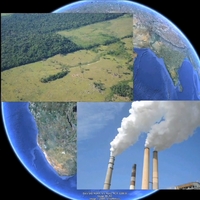 The prime minister said the weak agreement reached in Copenhagen at the weekend after all-night deliberations was a "first step towards a new alliance to overcome the enormous challenges of climate change". He called on all countries to show greater ambition as part of a campaign over the coming months to turn the agreement into a legally binding treaty.

"The talks in Copenhagen were not easy and as they reached conclusion I did fear the process would collapse and we would have no deal at all," he said. "We must learn lessons from Copenhagen and the tough negotiations that took place. Never again should we face the deadlock that threatened to pull down these talks. Never again should we let a global deal to move towards a greener future be held to ransom by only a handful of countries."

Brown added: "One of the frustrations for me was the lack of a global body with the sole responsibility for environmental stewardship. I believe that in 2010 we will need to look at reforming our international institutions to meet the common challenges we face as an international community," guardian.co.uk reports.

News agencies also report, While China's Premier Wen Jiabao insisted his government had played an "important and constructive" role, Britain said the meeting had lurched into farce and pointed the finger of blame at Beijing.

And the summit host, Danish Prime Minister Lars Loekke Rasmussen, rapped the lower-level negotiators for failing to make headway in nearly two weeks of talks and then leaving their masters with too much to do at the climax.

While Brown refrained from naming countries, his climate change minister Ed Miliband said China had led a group of countries that "hijacked" the negotiations which had at times presented "a farcical picture to the public".

The agreement finally put together by a select group of leaders set no target for greenhouse-gas emissions cuts and is not legally binding -- omissions Miliband blamed on Beijing.

"Both were vetoed by China, despite the support of a coalition of developed and the vast majority of developing countries."

Miliband's aides told the newspaper that Sudan, Bolivia and other left-wing Latin American governments were included in the criticism, AFP reports.

In the meantime, the U.N. secretary-general tried today to put a positive spin on a controversial accord that came out of climate change talks in Copenhagen last week.

Secretary-General Ban Ki-moon insisted that the Copenhagen Accord fulfills the parameters he had sought, even though the end result fell far short of even the most modest expectations voiced before the meeting.

Ban also supports keeping the process within the established U.N. framework, although he seems to acknowledge that serious changes are likely needed for any new treaty to stand a chance at becoming reality.

"We will consider how to streamline the negotiation process," Ban said. "All these lessons will be carefully reviewed today for a better result next year," The New York Times reports.