Medvedev and Obama are Optimistic Over Arms Control Deal

During Copenhagen Conference presidents of Russia and U.S. met to discuss matters of great concern. 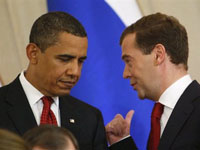 Medvedev and Obama are Optimistic Over Arms Control Deal

Barack Obama and Dmitry Medvedev expressed great hope to sign a deal concerning arms control in near future, though unlikely this year.

The two leaders met Friday as negotiators are seeking to bridge differences on elusive details of a successor to the Strategic Arms Reduction Treaty.

Obama said Friday that they were "quite close." He had wanted a new deal in place before the end of the year, but that appeared unlikely.

The Obama administration had identified a successor to the START treaty as among the most achievable areas of cooperation with Russia, as it seeks broader help from Moscow on issues including reining in Iran's suspected nuclear ambitions.

Although the 1991 START treaty expired Dec. 5, both countries have agreed to continue to honor its main provisions, pending the completion and legal ratification of a successor treaty.

Emerging from private talks with Medvedev on the sidelines of the U.N. climate conference, Obama expressed confidence that a successor pact will be agreed to in a "timely fashion." Medvedev said technical details still needed to be worked out.

Both leaders made only brief statements to reporters and took no questions. Neither one said anything about a possible timetable for signing a deal.

At a summit in Moscow last July, Obama and Medvedev agreed to cut the number of nuclear warheads on each side to between 1,500 and 1,675 within seven years, as part of a broad new treaty. They initially had instructed negotiators to seek a fully ratified deal by the Dec. 5 expiration.