Wednesday Iran test-fired the latest version of its longest-range missile. 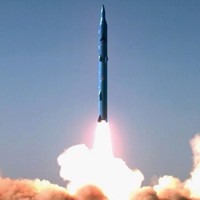 The test came a day after the US House of Representatives overwhelmingly approved tougher sanctions legislation against Iran.

Iran state TV showed the green-painted Sajjil-2 missile launching from a desert pad, its exhaust cloud at lift-off swallowing up Iranian flags planted in the ground. The countdown to the launch was completed with three chants of "Alahu Akbar!" or "God is great."

Defense Minister Gen. Ahmad Vahidi said the two-stage missile served as a “strong deterrent” against attack. Speaking on Iranian state TV, he said the missile’s “very high speed” made it “impossible to destroy.” English-language PressTV reported that the missile “hit the defined target” and was part of Iran’s “deterrent strategy [that] serves peace and security and is not a threat to regional stability,” The Christian Science Monitor reports.]

Meanwhile, President Barack Obama should "immediately" rally the world behind a new round of punishing sanctions against Iran after Tehran's latest missile test, a top US lawmaker said Wednesday.

"This missile test raises the specter of danger to US national security interests," Eric Cantor, the number two Republican in the House of Representatives, said in a statement.

"The world's largest state-sponsor of terrorism now is closer to having a deliverable nuclear weapon. Should that day come, global stability and efforts to combat nuclear proliferation will be permanently compromised," said Cantor.

Cantor noted that the House voted Tuesday to empower Obama to bar companies that help meet Iran's demand for gasoline from doing business with the United States, AFP reports.

The British prime minister, Gordon Brown, said the missile test “does make the case for us moving further on sanctions,” according to The Associated Press.

It was also reported, Iranian television gave a brief report on Wednesday of a successful test of the two-stage, solid-fuel missile called a Sejil-2. Iran’s defense minister, Ahmad Vahidi, said the new missile is faster, more accurate and harder to shoot down than earlier versions and that it increases “the country’s technical and tactical powers,” according to Iran’s official news agency.

Iran was clearly sending a warning to the West and to Israel, regional experts said.

“It shows that Iran has the ability to stir unrest in the region and impact U.S. interests,” said Mustafa el-Labbad, director of the East Center for Regional and Strategic Studies in Cairo. “It can reach the oil fields on the other side of the Gulf.”

Iran ’s test worsened already tense relations with the West over the breakdown in efforts to diplomatically resolve a dispute over its nuclear program. A deal in which Iran was to ship most of its low-enriched uranium abroad to be returned as higher processed fuel for a medical reactor was announced in October, but quickly became a political liability inside Iran. The Iranian government has tried to reshape the deal to something that could be sold at home, issuing terms the West has already rejected, The New York Times reports.