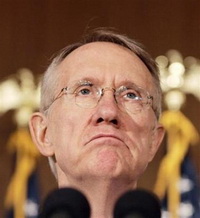 Democratic senators vote 60 to 39 to move sweeping health-care legislation to the Senate floor. Meanwhile, the significance of the move is in the debate ahead.

A handful of Democrat centrists say they can't support the government-sponsored health-insurance plan -- known as the public option -- that is included in the bill. And Democrats are divided over abortion, an issue that nearly derailed the House earlier this month when it narrowly passed a health bill that blocked abortion coverage from federally subsidized insurance plans, including some run by private insurers.

Another growing concern even as the bill progresses is the political heat on Democrats over expanded government spending amid rising unemployment and deficit concerns.

"We simply cannot ignore the growth in the federal government," said Sen. Blanche Lincoln of Arkansas, one of those centrists. She was the last Democrat ahead of the vote to declare her support, ensuring Democrats would have the 60 they needed to overcome Republican stalling tactics. But she and other holdouts warned that doesn't mean they'll support final passage, The Wall Street Journal reports.

It was also reported, after months of political maneuvering, Reid got the votes he needed to open debate on the floor -- but barely. Sixty senators, including 58 Democrats and two independents who caucus with the Democrats, supported moving ahead with the bill; the 39 Republicans who voted were all against it.

Some centrist Democrats are letting their party know that while they are open to debating the bill, they're not going to pass it as is. With so many Democrats on the fence and no Republicans leaning their way, there are still plenty of hurdles to come for the Democratic leadership and the bill.

The debate on amending the proposal will begin after Congress returns from its Thanksgiving break next week and is expected to last for weeks. Top Senate Democrats have already indicated that they're willing to make some changes.

"We are open because we want to pass the bill," Sen. Dick Durbin, D-Illinois, said on NBC's "Meet the Press" on Sunday, CNN reports.

Meanwhile, the House managed to pass a bill with a public option, but it remains to be seen if they will accept whatever version of the public option the Senate approves, if any. Meanwhile, some Democrats in the House the bill that comes out of conference if it still contains the abortion language added to the House bill. Abortion rights groups stepped up their lobbying campaign against the measure last week.

Meanwhile, the House last week passed in a separate bill a "Medicare fix" that prevents doctors from seeing a 20 percent pay cut from the federal program. The measure is not paid for and must still be approved in the Senate. Democrats have kept the measure separate from their comprehensive health care reform plan because they want the reform package to be deficit-neutral, CBS News reports.