Wednesday the Conservative leader David Cameron vowed to take back powers from Europe as he confirmed his party would no longer hold a referendum on the Lisbon Treaty. 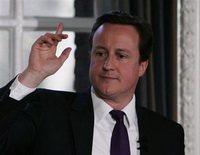 Opposition leader said he did not want a "massive Euro bust-up" but said that if he wins the next election due by June, he would seek to stop the "steady and unaccountable intrusion" of the European Union into British law.

In a speech in London, Cameron explained that his party had no choice but to abandon a "cast-iron guarantee" to hold a national vote on the European Union's reform treaty following its ratification Tuesday by the Czech Republic.

He admitted he was "disappointed" and "dejected" by the Czech decision but added that treaty was now law -- it is expected to come into force on December 1 -- and no referendum would change that, AFP reports.

It was also reported, he also promised a referendum on any future EU governance treaties or attempts to adopt the euro. He said his party would enact a “Sovereignty Bill,” asserting the U.K. Parliament’s ultimate authority in setting British laws.

The commitments are meant to placate members of his own party who want to reduce the influence of the EU in the U.K. affairs after the Lisbon Treaty streamlining governance of the region was ratified yesterday. Divisions within the party over Europe helped destroy the last Conservative government. Cameron said he didn’t want a fight with EU leaders to distract him from reducing the U.K.’s record deficit.

“We will not rush into some massive euro-bust-up,” Cameron told reporters in London today. “If we win the election, we will inherit the worst public finances of any incoming government for 50 years. That has to come before anything else.”

Today, Cameron gave himself “the lifetime of a Parliament,” or up to five years, to achieve his goals. That would take him past the next round of EU budget negotiations, in 2013. Cameron said he wanted to see “a tough financial settlement” in those discussions, though he said his top priority would be cutting the U.K.’s deficit, Bloomberg reports.

Meanwhile, Liberal Democrat foreign affairs spokesman Ed Davey, whose party campaigns for an "in or out" referendum from a pro-EU standpoint, said: "Cameron's confused middle way will satisfy no one.

"It combines pointless gimmicks with dangerous proposals which would mire Britain in an endless round of negotiations.

"After almost a decade of institutional wrangling it is madness to re-open long and drawn out discussions which would inevitably result in a bust-up with Europe," BBC News report.