Obama and His Team to Make Decision on Afghan Strategy

President Barack Obama's war council is weighing a new role for Pakistan in the 8-year-old struggle in the region. The council recognizes that the U.S. can neither win in Afghanistan nor succeed more broadly against al-Qaida without Pakistan's cooperation. 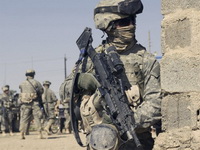 Obama and His Team to Make Decision on Afghan Strategy

Obama planned sessions Thursday with Vice President Joe Biden and Secretary of State Hillary Rodham Clinton in the Oval Office to continue the intense discussion about the increasingly unpopular war in Afghanistan. The White House scheduled another, larger war council session a fifth of five announced for Friday, when the focus may finally shift to just how many additional troops would be needed to execute Obama's vision for a war he inherited but now must execute.

The White House revealed that Obama has in hand and has for nearly a week the troop request prepared by the top U.S. commander in Afghanistan, Gen. Stanley McChrystal. It is said to include a range of options, from adding as few as 10,000 combat troops to McChrystal's strong preference as many as 40,000.

A senior Pentagon official said Thursday that the Obama administration's delay in deciding on a strategy has, in turn, stalled European allies who are weighing how much more to contribute to Afghanistan, The Associated Press reports.

It was also reported, in recent months U.S. casualties in Afghanistan have risen sharply, amid more aggressive operations against the Taliban and other militant groups. Public opinion polls show the war is steadily losing support among the American public.

The president, who held a session earlier in the week with members of Congress, convenes a meeting of national security officials on Friday.

McChrystal has warned the United States could lose the war if more troops are not deployed to Afghanistan. He is said to be calling for as many as 40,000 additional troops, Voice of America reports.

CNN International quoted Rep. Ike Skelton, D-Missouri, as saying,"I really think that the president's going to have to listen to Gen. McChrystal. He's his man. He's his pick. This is a matter of national security."

Rep. Peter Hoekstra, R-Michigan, said Wednesday that whatever the president decides, he must lead "boldly in a mission that needs to be successful, outline his case to the American people and then align all of our resources ... to execute the strategy that he selects," CNN International reports.