After the positive cost report on health care overhaul Democrats got a chance to rally around a Senate plan that significantly expands coverage while trimming the federal deficit. 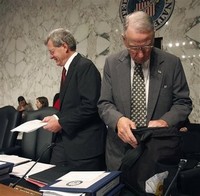 The Congressional Budget Office said Wednesday that the latest version of the Senate Finance Committee proposal would expand coverage to 94 percent of all eligible Americans at a 10-year cost of $829 billion.

The budget umpires added that the legislation would reduce federal deficits by $81 billion over a decade and could lead to continued reductions in federal red ink in the years beyond.

But the middle-of-the-road plan still leaves about 25 million people uninsured when fully phased in, in 2019. Of those, nearly 17 million would be U.S. citizens or legal residents. Nearly 50 million U.S. residents now lack coverage , The Associated Press reports.
In the meantime, the political battle over how to interpret the CBO's report may have only begun.

"Our balanced approach to health reform has paid off yet again with the news today that the America's Healthy Future Act remains fully paid for, begins to reduce the federal deficit within 10 years and makes significant reductions in federal debt over the next several decades," said Sen. Max Baucus, the chairman of the Senate Finance Committee the key negotiator behind the legislation.

Republicans -- with the exception of Maine Sen. Olympia Snowe -- panned the Finance effort.

"A celebration of the deficit effects masks who pays the bills," Sen. Chuck Grassley, ranking Republican on the Finance Committee, said. "This package includes hundreds of billions of dollars in new taxes and fees. Most Americans with health insurance will see their premiums increase," FOXNews reports.

Legislation overhauling U.S. health care cleared its latest obstacle when the Congressional Budget Office. The $829 billion legislation would cut the deficit by $81 billion over 10 years, with new taxes and savings more than offsetting the cost, the CBO said in a preliminary analysis yesterday. That eases one of the major concerns about the bill.

"The report is good news," panel Chairman Max Baucus, a Montana Democrat, said after the release of the analysis of the measure, an amended version of a proposal he made last month. "Our balanced approach in the finance committee to health reform, I think, has paid off," Bloomberg reports.