Today when  election race is over, it's high time to compare election results and analyze  the situation on political arena in Germany. 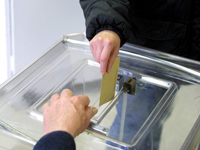 Germany's Social Democrats did not expect their election result would be this bad.The nation's main center-left party was ejected unceremoniously from government Sunday after 11 years, picking up easily its worst share of the vote since World War II.

"There is no talking around it: this is a bitter defeat," Chancellor Angela Merkel's Social Democratic sobered challenger, Frank-Walter Steinmeier, told supporters at the party's Berlin headquarters.

That gave the conservatives 239 seats and the Free Democrats 93 in the lower house — for a comfortable center-right majority of 332 seats to 290. The Social Democrats won 146, the Left Party 76 and the Greens 68.

Steinmeier said he hoped to be a strong opposition leader, and party chairman Franz Muentefering said he planned to stay on, but neither immediately offered a vision for the party's future.

In 2005 the party had snared an equal share of Merkel's government and many of its top jobs — including the Foreign Ministry for Steinmeier — after finishing just behind her conservatives with 34.2 % of the vote.

But the outgoing "grand coalition" has not been kind to the party, which on Sunday plunged below its previous postwar worst of 28.8 % in 1953.

It was squeezed both by Merkel's popularity and the opposition Left Party, whose hardline opposition to economic reform drained the Social Democrats both of supporters and votes.

"The people who voted for the Left Party now, and not us, did so because they want government to take care of everything and they feel that the SPD is not doing that anymore," Conrad said.

In opposition, the Social Democrats will have time to resolve their dysfunctional relationship with the Left Party — which combines ex-communists with former Social Democrats who were alienated by the SPD's embrace of welfare-state cuts.

Steinmeier and Muentefering refused to deal with the Left Party at national level — citing its radical economic stance and call for German soldiers' immediate withdrawal from Afghanistan, as well as the presence in its leadership of abrasive former SPD chairman Oskar Lafontaine.

However, they have sanctioned alliances at regional level and conceded that national alliances may one day be possible — a stance that has been something of a problem for the SPD's credibility.

Opposition is likely to result in the SPD moving closer to the Left Party.

Lafontaine celebrated his new party's result as a "big day for the Left." He declared that it "has now established itself as a party" by entering parliament for the second time. Projections showed the party with more than 10 percent of the vote.

He said his is the only party that opposes the policies which caused the economic crisis. Reported by The Associated Press.