Nicholson and Freeman team up to star at "Bucket List" 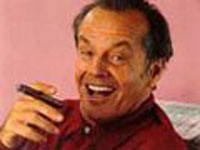 Nicholson and Freeman team up to star at "Bucket List"

It is scheduled for release in North America by Warner Bros. on December 25, 2007 in select theaters. It will be available in all theaters on January 11, 2008. The story follows two terminally ill men (Nicholson and Freeman) on a road trip with a wish list of things to do before they die. Freeman's actor son Alfonso Freeman plays Chambers son.

Nicholson's head was shaved on film, which explains his bald appearance at the 79th Academy Awards on February 25, 2007.

Two elderly men, auto mechanic Carter Chambers (Morgan Freeman) and hospital-corporation head Edward Cole (Jack Nicholson), discover they both are terminally ill with cancer. Sharing a hospital room, they become friends and decide to fulfill their personal desires through "The Bucket List" before they "kick the bucket". Bankrolled by the wealthy Cole, they sky dive, race each other in classic cars, and take Cole's private jet around the world.

Ben Jelen's song "Come On" is also featured in one of the film's theatrical trailers.

The official soundtrack is set to be released on January 15, 2008, according to Amazon.com.

On November 20, 2007, John Mayer released the song "Say" which is to be on the soundtrack. A music video for the song was introduced shortly after, which introduced clips from the movie.

“The Bucket List” operates on the hope that two beloved stars rubbing their signature screen personas together can spark warm, fuzzy box office magic. I wouldn’t count on it. Stars or no, it is an open question whether audiences will flock to a preposterous, putatively heartwarming buddy comedy about two men diagnosed with terminal cancer living it up in their final months. The geezers chafing at death’s doorstep are Edward Cole (Jack Nicholson) and Carter Chambers (Morgan Freeman), cancer patients who meet cute in the room they share in a hospital owned by Edward. A greedy billionaire health care mogul, Edward is a victim of his own ruthless cost-cutting program that decrees two to a room in his cramped establishment. Slipping into their stock screen personas of rampaging fool (Mr. Nicholson) and pious wise man (Mr. Freeman), neither actor adds a note that we haven’t seen before, the New York Times report.