Court ruled this afternoon to indemn Kevin Fox with $15.5 million for fabricated evidence and forced confession from him for his 3-year-old daughter's murder. 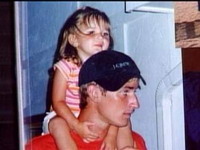 Earlier it was reported that the case began on a quiet Sunday. Fox was home with Riley and Tyler, while his wife was in Chicago taking part in a charity walk.

Fox told police that the night before he had gone to a street festival. He had left the two children in the care of their grandparents. After he picked them up, around midnight , he put them to bed.

In the morning, the front door to the home was open, but Kevin Fox said he did not know whether his daughter had opened it and wandered off.

The girl’s body was found later that day in Forked Creek, 4 miles from the family's home.

An autopsy determined that Riley Fox had been drowned.

Kevin Fox, then 27, was arrested four months later after the sheriff's office said he gave a videotaped statement implicating himself in the crime. Kevin Fox confessed on videotape that he accidentally bumped Riley's head on the bathroom door but panicked and tried to make it look like an abduction.

Fox, in the interview, said he sometimes despaired being in jail but never gave up hope that the truth would emerge and he would be released.

The Foxes allege detectives subjected the father to threats, lies and false promises of a deal during a 14.5-hour interrogation that began late Oct. 26, 2004 , and ended in his arrest early the next morning. The father spent eight months in prison for his child's murder before being freed through DNA testing when saliva recovered from the rape kit excluded him.

A later DNA test on duct tape found on Riley's mouth also excluded Kevin Fox, and was the same genetic profile of that from the rape kit.

The federal jury was asked to decide if detectives acted reasonably or if they conspired to frame Kevin Fox. The jurors were urged to reach a verdict based on the law, not vengeance or sympathy for a couple who have suffered an undeniable loss - the violent slaying of their little girl.

The verdict was stated at 2:20 p.m. after 16 hours of deliberations spread over three days.