The Grinch who stole Christmas may have felt pangs of remorse, unexpectedly returning Christmas goods stolen from the house of a New Zealand family. 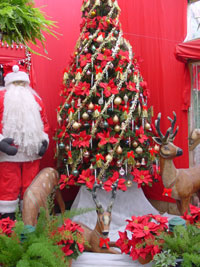 But there was "not really a happy ending" to the saga, Senior Constable John Chambers told The Associated Press, with most of the stolen goods - which had been bought as Christmas gifts - likely to be thrown out because they had been badly damaged.

Stereo and DVD equipment, antiques and kitchen appliances were taken during a burglary late Saturday night at a property at Bannockburn , near the town of Cromwell on South Island .

Most of the 20,000 New Zealand dollars (US$15,100; EUR10,500) worth of goods were returned several hours later, wrapped in a sheet and left on the roadside outside the house.

The burglars returned again Monday to drop off two remote controls, which they left in the mailbox.

Chambers said apart from the thieves having "a change of heart," it was possible they were living "fairly close" to the scene of the burglary.

People there may have "read the riot act to them and told them to get the stuff out of their house and return it quick smart," he said. "It's a shame they didn't take more care of the equipment."

At the time of the burglary, the homeowner's 16-year-old son was the only person in the house, but had slept through it, Chambers said.

The teenager had left the front door unlocked and lights on as his father was due to arrive home early on Sunday. The family has insurance cover.