Robert Boyle, who has been working in the movie industry for more than 50 years, is going to get an Oscar this year. 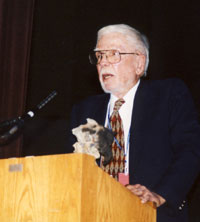 The governors of the Academy of Motion Picture Arts and Sciences have voted to give the 98-year-old production designer an honorary Oscar at the 80th Academy Awards, the AP reports.

"Robert Boyle's career is truly worthy of this honor," academy president Sid Ganis said in a news release Wednesday. "From his multiple collaborations with Alfred Hitchcock to his top-quality work on so many other films, this is a master film artist."

Boyle began his film career in 1933 as a draftsman in Paramount Studios' art department. He has earned four Oscar nominations for art direction and was the subject of an Oscar-nominated documentary short in 2000.