Hundreds of thousands of people gathered Wednesday to honor the Mexico's beloved patron saint, the Virgin of Guadalupe. 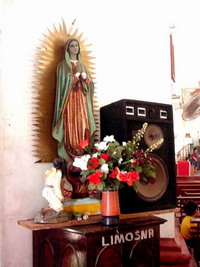 Celebrants set off fireworks, sang and prayed inside the packed Basilica of the Virgin of Guadalupe to celebrate the 476th anniversary of the dark-skinned virgin's apparition to the Indian Juan Diego.

Her image on Juan Diego's cloak helped draw Mexico's Indian population to the Catholic faith shortly after it was introduced by invading Spaniards. The church eventually declared her patron saint of all the Americas.

Juan Diego himself was named the first Indian saint in the Americas by the late Pope John Paul II in 2002, and his cloak is still on display at the basilica.

This year's celebration included ethnic dancers from around Mexico and crowds of people carrying large posters with the virgin's image to be blessed inside the basilica.

This is the third year in a row that Gerardo Romero, 23, has made the pilgrimage to the basilica.

"I'm doing it so that my daughter will be born healthy," said Romero, a former drug addict who crawled on his hands and knees through the large courtyard leading up to the basilica.

"I am giving thanks for everything the virgin has given us all year," added Trinidad Manuel Garcia, 70, a Mexico City native dressed in the garb of his Indian Mexica ancestors. Garcia said he has made the pilgrimage every year since 1949.