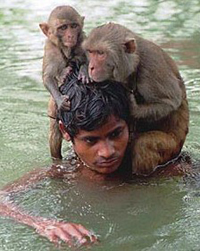 The glitzy city state of Singapore has one of the world’s largest desalination plants and is paying Dutch experts tens of millions of dollars (euros) to devise ways to protect their island from the seas, surrounding it.

Bangladesh, meanwhile, is digging out from a cyclone that killed at least 3,200 and left millions homeless. The impoverished country wants to build up its coastlines to ward off the potentially devastating impacts of global warming, but has no money.

The disparities between the rich and poor in adapting to encroaching oceans and the floods and droughts that are expected to worsen with rising temperatures have dominated the U.N. climate conference on Indonesia's resort island of Bali.

The haves - which pump the lion's share of pollutants into the atmosphere - are arguing about emission targets and high-tech solutions. The have-nots - which contribute little to global warming but are disproportionately among the victims - need tens of billions of dollars (euros) to save their sinking islands, to help farmers adapt and to relocate those in the path of destruction.

"The issue of equity is crucial. Climate affects us all, but does not affect us all equally," U.N. Secretary-General Ban Ki-moon told delegates from nearly 190 nations Wednesday. "Those who are least able to cope are being hit hardest. Those who have done the least to cause the problem bear the gravest consequences."

The United Nations Development Program says 98 percent of the 262 million people hit by disasters from 2000 to 2004 came from impoverished countries, while the money to prevent disasters in the United Kingdom alone was six times what was spent in all poor countries.

The number of people affected by natural disasters has quadrupled over the past two decades - from famines in Africa to floods in South Asia, according to Oxfam International, though it is not clear how much of that is due to global warming.

But with scientists predicting that temperatures could rise by as much as 5 degrees Celsius (9 degrees Fahrenheit) things are only expected to get worse.

The U.N. predicts that about 1.8 billion of the most vulnerable people across the globe will be hit by water shortages, 600 million more will go hungry and 32 million will be displaced by droughts and floods.

From Venice to New Orleans, the West is already taking action to fight climate change within their borders.

Canada said Monday it would spend US$85.4 million (EUR58 million) on adaptation measures, including tens of millions of dollars (euros) to help its Inuit communities adapt to warming Arctic climate.

The low-lying Netherlands - which for centuries has built a vast network of canal systems, experience it is now passing on - is spending an additional US$25 billion (EUR17 billion) to improve its water defenses. Italy is doing the same.

Singapore, meanwhile, has built a 139 million desalination plant to boost its domestic water supply and teamed up with the Dutch engineering firm Delft Hydraulics as part of a more than US$208 million (EUR141 million) effort to become a hub for climate change research - much as it has for biotech and the medical industry.

The tiny city-state is itself vulnerable to global warming, but also realizes that "there is great potential to make money," said Peter Ng, who is part of the Dutch partnership called Singapore Delft Water Alliance. "If we play our cards right and do what we do well, other countries will come to us for help."

Poor nations, in the meantime, are doing what little they can.

Some are creating early warning systems, building bamboo storm shelters on stilts or making plans to relocate island communities. But the money often does not reach villages hardest hit by worsening floods and the rising seas.

In Kaoakola located along Bangladesh's Jamuna River, for instance, Mohammad Sheikh complains he has been forced to move his house three times because of increased floods.

"We're very poor. We can't afford it," the 70-year-old said, adding that he has been forced to become a day laborer after his 300 acres were lost to flooding. "The river, the floods have taken everything from me."

The Maldives - a popular tourist destination made up of more than 1,000 low-lying islands _ also exemplifies the limits of good intentions in developing countries. It has rolled out plans to move communities to a few, well-protected islands, but so far has only been able to come up with the money to build up one such island.

"Climate change has become a daily reality in the Maldives and other small island states," said the country's president, Maumoon Abdul Gayoom, recalling how his islands were being hit by storm surges and erosion while fish were dying of mysterious diseases.

Even if the maximum suggested assistance is approved, it won't cover the costs.

Only up to US$300 million (EUR203.9 million) annually will be available through a U.N. adaptation fund expected to be created in Bali and up to US$1.5 billion (EUR1 billion) a year if an international climate agreement to succeed the Kyoto Protocol, which expires in 2012, is approved.

That still falls far short of the nearly US$86 billion (EUR58.4 billion) the UNDP estimates is needed annually by 2015, prompting some to suggest that additional mechanisms, such as a tax on bunker fuels or, as Oxfam demands, funding targets for industrialized countries.

Impoverished nations are also demanding a post-Kyoto agreement offer of increased access to technology for adaptation and assurances the money for climate response won't be taken from already meager development aid.

"The money they put up for this adaptation fund is peanuts. It's nothing," said Khandaker Rashedul Haque, a Ministry of Environment comparing his problems in Bangladesh to those of New Orleans, which is still recovering from Hurricane Katrina.