Busy travelers occupied with flu shots at many US airports

Travelers at major U.S. airports can get a flu shot. 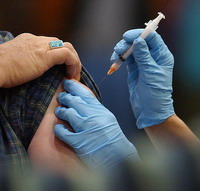 Busy travelers occupied with flu shots at many US airports

For years, some airports have been offering flu shots to airline passengers before they cleared security. But many travelers were too afraid of missing their flights to stop.

So this year, airports in such cities as Atlanta, Chicago, Denver and Newark, New Jersey, are setting up "airside" health stations close to the gates, past the security checkpoints.

"It's helpful being on the airside because people don't know how long it's going to take getting through security so they don't want to take a risk of waiting in a medical clinic or being stuck in security and not making their plane," said Maureen Zampella, director of nursing and general operations manager of a service that is offering flu shots at the Newark airport.

The vaccinations are seen as particularly convenient for those who travel frequently on business.

"They don't have time to go to the physician," said Dr. Dominic Mack, chief medical officer of the service offering shots in Atlanta.

Airline passengers receiving the shots will not be protected right away. It takes about two weeks for a shot to offer full protection. Getting vaccinated now offers plenty of time for the shot to take full effect before the peak flu season begins, typically after December.

Last year, Chicago's O'Hare Airport dispensed about 5,000 flu shots to passengers and employees from kiosks next to gates.

"It went over great," and the idea was expanded this year to Chicago's Midway, said Dr. John Zautcke, medical director for the University of Illinois Medical Center at O'Hare. So far, O'Hare and Midway have vaccinated a total of about 9,500 people this year.

Airport health officials said eventually they may offer other vaccinations, too, as well as cholesterol tests and screening for high blood pressure.