Ten suspected insurgents, some with ties to al-Qaida, were arrested in Iraq. U.S. soldiers captured  a "large amount" of propaganda materials and weapons. 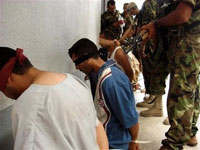 One suspect thought to be involved in "terrorist media and propaganda operations" was detained in Baghdad, along with a "large amount" of propaganda materials, the military said in a statement.

North of Baghdad, troops captured a suspect accused of being involved in weapons manufacturing and car-bomb attacks in Tikrit. The military accused the suspect of having ties to other al-Qaida in Iraq weapons makers.

In Hadid, a village near Baqouba, 35 miles northeast of Baghdad, forces detained another suspect in propaganda and media operations. The detainee is allegedly tied to several al-Qaida in Iraq members recently detained or killed by coalition forces.

Names of those picked up were not released.