Over 65 million people honored Thailand's King Bhumibol Adulyadej with festivities amid concerns about his health and political instability, celebrating his 80th birthday. 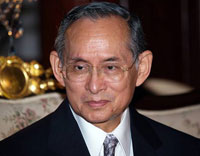 Bhumibol, also the world's only U.S.-born monarch, last year celebrated 60 years on the throne, an achievement marked by an outpouring of public devotion in which hundreds of thousands of people gathered to glimpse him waving from a distant balcony at Bangkok's Royal Plaza.

While no less enthusiastic, this year's celebrations have been shadowed by uncertainty over potentially divisive elections later this month, worries about the health of the recently hospitalized king, and concern about what the future holds for the monarchy.

The Dec. 23 elections will be the first since a September 2006 military coup toppled the elected government of former Prime Minister Thaksin Shinawatra.

Thais look to the king as a national unifier, and his profile has been high during the past two years of political uncertainty.

Thai politics were destabilized by demonstrations against Thaksin leading to his ouster, and the military-installed regime that succeeded him has failed to restore public confidence.

Unity of the nation has become Bhumibol's recurring theme in recent speeches.

"I am glad that everyone has come together in unison to give me birthday wishes," he told a crowd of well-wishers Wednesday, seated on a golden throne and dressed in a gold brocade robe.

In his annual televised birthday speech Tuesday night, Bhumibol likened the country's situation to difficulties he has in walking. He was recently hospitalized for three weeks for symptoms of a stroke, the latest of many ailments, and now moves about with a walker.

"(We) must be united, like our legs must be united which means one goes forward and one pushes back before moving forward," he said. "This way, we could walk without falling. Without unity, the country will face disaster."

The depth of reverence for the king is impossible to ignore: ahead of last year's anniversary of his reign, Thais were encouraged to wear yellow every Monday as a sign of devotion, with the practice continuing and surging on special occasions.

In Thai tradition, yellow represents Monday, the day that Bhumibol was born.

A sea of yellow greeted the king and his family as they drove Wednesday morning from Chitralada Palace, the royal residence, to the ceremonial Grand Palace.

Tens of thousands of people jammed the sidewalks, waving Thai and yellow royal flags to greet them as they drove by.

"I love the king. He has done so much for the country," said Todsapon Katiya, a civil servant who had waited since 4:30 a.m. "He tends to the poor, the sick, the crippled, the blind. No man has done as much in a lifetime. I want him to stay with us forever."

Many in the crowd stayed all day, as the royal family traveled twice between the two palaces, holding a religious ceremony for the king's birthday with 81 Buddhist monks at the Grand Palace in the afternoon.

The route, decorated with placards, was spectacular at night, with elaborate lights strung across streets and on virtually every building.

"You know they call Thailand the golden land, the land of prosperity, where people live happily without trouble," said Umapon Pongsawap, a high school teacher. "Many people think it's just a myth. But it's true and it won't be possible in this modern time without him."

Bhumibol has never publicly commented on his successor, an issue that weighs heavily on Thai minds even if it is rarely discussed in public.

His son, Crown Prince Vajiralongkorn, has been groomed to succeed him. But the 55-year-old prince lacks the stature and popularity of his father. There is great concern that Vajiralongkorn, who has married three times, fathered six children and for years had the reputation of a ladies' man, will have difficulty living up to Bhumibol's record of hard work and diligence.

Bhumibol was born on Dec. 5, 1927, in Cambridge, Massachusetts, where his father, Prince Mahidol, was studying medicine at Harvard University. At the age of 19, he became the ninth king of Thailand's Chakri dynasty on June 9, 1946, after his older brother Ananda died from a mysterious gunshot to the head.

Though he is a constitutional king with no formal political role, his royal authority has carried the nation through coups and popular uprisings as he has reigned alongside democratic and dictatorial regimes.