The former KGB officer Andrei Lugovoi, accused of killing Kremlin critic Alexander Litvinenko in London last year, claims that his recent election to Russia's parliament was not a spit in the face of the West. 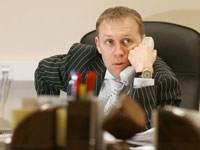 "I would advise them to wipe it off," Andrei Lugovoi said at a news conference.

British prosecutors have named him as their chief suspect in the death of Litvinenko, but Russia has refused to hand him over.

Lugovoi was elected to parliament Sunday from the nationalist Liberal Democratic Party, a position that will give him immunity from prosecution.

Litvinenko, a renegade member of the Russian secret services hated by many former colleagues, died in a London hospital on Nov. 23, 2006, after ingesting radioactive polonium-210. He accused President Vladimir Putin on his deathbed of being behind his killing - charges the Kremlin angrily denied.

Lugovoi, who met with Litvinenko on Nov. 1, hours before he fell ill, has denied any involvement in the death. He has described the British accusations against him as an effort to shift suspicion away from the British secret services, which he claimed had reason to kill Litvinenko.

Speaking to reporters for the first time since his election, Lugovoi refused to answer further questions about the Litvinenko case, saying he was tired of the subject.

During the past year Lugovoi has held several news conferences and given lengthy radio interviews during which he enthusiastically voiced his theories about Litvinenko's killing.

"Now Mr. Putin and Mr. Lugovoi stand together as the emblem of Russia - the two people linked by a murder. With heroes like these, Russia is destined to a sad future," she said in a statement.

United Russia, the main pro-Kremlin party, won a crushing victory in the parliamentary election, taking 315 of 450 seats. The Communists - the only party that is expected to show some opposition to the Kremlin - won 57 seats, followed by the Liberal Democratic Party with 40 seats and Just Russia with 38.

Western observers said the vote was not free nor fair.

Vladimir Zhirinovsky, the leader of Lugovoi's party, complained Wednesday of vote-rigging in several Russian regions where his party did worse than in the rest of the country, and blamed local authorities.

"Just as road accidents cannot be avoided in any country in the world, there are officials who manipulate (elections), who falsify, even though no one has asked them to do it," Zhirinovsky said.