On Wednesday polar bear Knut who was rejected by his mother invites everyone to Berlin Zoo to celebrate his first birthday with cake and free entrance for children. 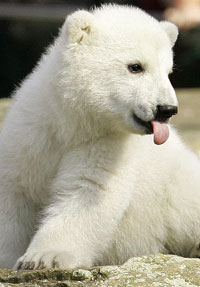 The Berlin Zoo pulled out all the stops to fete its star attraction, who has gone from a fluffy white powderpuff of a cub to a full-grown polar bear with a cheeky curiosity and a penchant for muddying his coat by rolling in the dirt.

The zoo said Knut has generated up to EUR 10 million (US$14.7 million) over the past year by more than doubling ticket sales, as well as income from licensing of Knut toys, books and other trinkets.

Weighing just 810 grams (nearly 2 pounds) at birth, Knut has grown to more than 110 kilograms (243 pounds), and in July had to be put on a diet amid concerns that treats - like his favorite croissants - were piling on the pounds.

That means he won't be allowed a slice of his giant birthday cake - made from 300 eggs, 15 kilograms (33 pounds) each of flour and sugar, as well as 10 kilograms (22 pounds) of marzipan. Proceeds of slices sold to onlookers will go to the zoo's foundation, organizers said.

Abandoned at birth, along with his twin brother who only survived a couple of days, Knut first attracted attention when Berlin's media picked up the story of his main caregiver camping out at the zoo to give the cub his bottle every two hours.

The story angered animal rights activists, who tried to sue the zoo for cruelty to animals by preventing nature from taking its course when the cub was rejected - even if it cost him his life.

By that time, Knut was a 3-month old white furball, with button eyes and his own fan club, who had been photographed dozens of times - including for the cover of Vanity Fair - and attracted thousands to the zoo.

Now that he is grown, zoo officials say they do not have room to keep Knut permanently and are considering other offers from zoos in Europe , with an eye to finding him a mate.

Thomas Doerflein, who raised Knut by hand, cuddling him and playing with him in addition to feeding him from a bottle, told Germany's mass-circulation Bild on Wednesday, he hoped the bear would soon find a new home in another zoo.

"A spacious enclosure. A female partner. At some point, Knut needs to leave me," Doerflein was quoted as saying.