People's Mujahedeen of Iran removed from Britain's list of terrorists 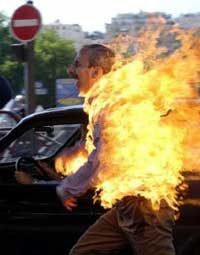 People's Mujahedeen of Iran removed from Britain's list of terrorists

One of Iran’s most powerful opposition groups will be removed from the U.K. list of terrorists, a court ruled Friday.

The People's Mujahedeen of Iran and its affiliates had appealed to authorities to be taken off the list, which includes the likes of al-Qaida and the Kurdish PKK. Britain's Home Office had fought to keep them on the list.

The decision by the Proscribed Organizations Appeal Commission was an important victory for the group, which is still considered a terrorist organization in the United States and the European Union, and has been engaged in long-running legal battles in both places to clear its name of the terrorist tag.

Lawyers for Britain's Home Office said it would appeal.

Last year, the group successfully challenged an European Union decision to freeze its assets, although it was unsuccessful in removing its name from the EU list of terrorist groups.

While officially banned in most Western countries, the group's standing is complicated by the looming confrontation between the United States, Germany, France and Britain and Iran over Tehran's disputed nuclear program.

The group's ambition of overthrowing Iran's theocratic regime has won the praise of U.S. lawmakers worried by allegations that the country is attempting to build a nuclear weapon.

The group's devoted following among Iranian exiles and its aggressive media operation has also helped it garner considerable sympathy in Europe. The group is backed by some European parliamentarians, and, in Britain, the effort to appeal its terrorist status was supported by 35 peers and lawmakers, including former Home Secretary David Waddington.

Originally Marxist-Islamist, the group was set up in the mid-1960s to oppose the U.S.-backed dictatorship of the late Shah Mohammad Reza Pahlavi. It participated in the country's Islamic Revolution but soon fell out with the clerical government and launched a campaign of assassinations and bombings in an attempt to topple it.

The group moved to Iraq in the early 1980s and it fought Iran's Islamic rulers from there until the United States invaded in 2003. The Americans have since disarmed thousands of the group's members and confined them to a camp near Baghdad.

Despite occasional run-ins with the law, supporters of the group continue to operate openly in Europe, where they regularly organizes protests, rallies and news conferences denouncing the government in Tehran.