A man who engaged people registered on “lonely hearts” sites in secretly videotaped sex and then used tapes for blackmail pleaded guilty to grand larceny and conspiracy charges. 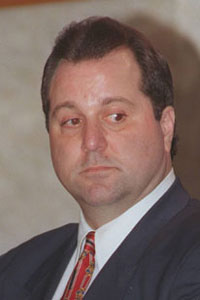 Michael Largue, 46, pleaded guilty Thursday in exchange for a sentence of up to eight years in prison. Co-defendant Shawn Payne has pleaded guilty and is expected to get up to seven years at her sentencing next month.

Prosecutor Kathleen Rice said she was satisfied that they pleaded guilty to the top charges. Each faced 20 years in prison if convicted at trial.

"They will be receiving serious prison sentences for what they have done," Rice said.

After their arrest in January, police seized an estimated 100 hours of videotape of people engaged in sex acts from Largue's Franklin Square home, prosecutors said.

Payne and Largue, who at the time were a couple, met their victims on a number of adult Internet sites, prosecutors said.

Largue would tell women that they were "the one," and that he wanted to marry them. He then would offer to help married women get divorced and would hire a financial adviser - Payne - to assist them, prosecutors said.

Several victims gave the defendants their banking and financial information while others were urged to sell or mortgage their homes and move in with Largue, prosecutors said. One woman lost $50,000 ( EUR 33,925).

Another scenario involved Internet chats and telephone calls between Payne and a male victim. Prosecutors said Largue secretly videotaped and photographed the encounters.

Payne then told the victim that she would send the damaging images of the sex to his wife unless he paid $50,000 ( EUR 33,925), prosecutors said.