The head of al-Qaida Osama bin Laden released a new tape where he calls on Europeans to stop supporting the U.S. in their war against Afghanistan. 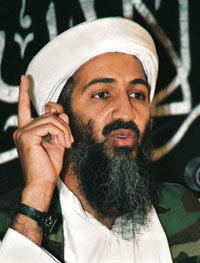 Bin Laden said it was unjust for the United States to have invaded Afghanistan for sheltering him after the Sept. 11 terror attacks, saying he was the "only one responsible" for the deadly assaults on New York and Washington in 2001.

"The events of Manhattan were retaliation against the American-Israeli alliance's aggression against our people in Palestine and Lebanon, and I am the only one responsible for it. The Afghan people and government knew nothing about it. America knows that," the al-Qaida leader said.

Two brief excerpts of the tape titled "Message to the European Peoples" were initially broadcast Thursday on Al-Jazeera television. An English transcript of the entire five-minute tape was later provided to The Associated Press by the SITE Institute and the IntelCenter, both private groups that monitor terror web sites. The tape was released as a video but the groups said that the only image was an old photo of bin Laden.

The message appeared to be another attempt by the terror mastermind to influence public opinion in the West. In 2004, he offered Europeans a truce if they stopped attacking Muslims, then later spoke of a truce with the United States . In both cases, al-Qaida then denounced those areas for not accepting its offer.

In the latest tape, bin Laden said that Afghans have been caught up in decades of struggle, first "at the hands of the Russians ... and before their wounds had healed and their grief had ended, they were invaded without right by your unjust governments."

Bin Laden went on that the war was "waged against the Afghans without right," and that coalition troops have not followed the "protocol of warfare." He said the result was that most bomb victims have been women and children.

"I have personally witnessed incidents like these, and the matter continues on an almost daily basis," he said.

"I think our NATO allies understand quite clearly what is at stake in Afghanistan as well as elsewhere around the world in fighting the war on terror," he told reporters. "It's going to require a sustained commitment over a period of time and we have seen that kind of commitment from our European allies."

FBI analysts were reviewing the tape but were not immediately able to say when it might have been recorded nor could they provide other details. Spokesman Richard Kolko said it was being examined "to determine if it is authentic and for any intelligence value."

"As the FBI has said since 9/11, bin Laden was responsible for the attack," Kolko said in a statement. "In this latest tape, he again acknowledged his responsibility. This should help to clarify for all the conspiracy theorists, again - the 9/11 attack was done by bin Laden and al-Qaida."

This has been the deadliest year in Afghanistan since the U.S.-led invasion in late 2001, with more than 6,100 people killed - including more than 800 civilians - in militant attacks and military operations, according to an Associated Press tally of figures from Afghan and Western officials.

Bin Laden said European nations joined the U.S. invasion of Afghanistan "because they had no other alternative, only to be a follower."

"It suffices as evidence of this your entering of this war and your excusing of American soldiers from being held to account by the European courts. For this reason, this address of mine is to you, not to your politicians," he said, urging Europeans to pull away from the fight.

"The American tide is ebbing, with God's help, and they will go back to their countries," he said, speaking of Europeans. "It is better for you to stand against your leaders who are dropping in on the White House, and to work seriously to lift the injustice against the believers."

Bin Laden issued four public statements earlier this year - on Sept. 7, Sept. 11, Sept. 20 and Oct. 22. The Sept. 7 video was his first in three years and was issued to mark the sixth anniversary of the Sept. 11 attacks.

Al-Qaida has dramatically stepped up its messages - a pace seen as a sign of its increasing technical sophistication and the relative security felt by its leadership. Bin Laden is believed to be hiding along the Afghan-Pakistan frontier.

Bin Laden's message was the 89th this year by Al-Qaida's media wing, Al-Sahab, an average of one every three days, double the rate in 2006, according to IntelCenter, a U.S. counterterrorism group that monitors militant messaging.