An Iraqi Kurd, a Palestinian immigrant and a Danish convert to Islam were convicted of plotting a bomb attack in one of Denmark's most high-profile terror cases. 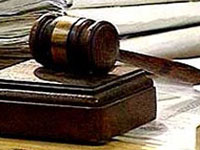 A fourth defendant was acquitted in the case, which stemmed from a 2006 anti-terror sweep prompted by tips from an informant who infiltrated the group.

A jury in the Eastern High Court in Copenhagen handed down guilty verdicts to Mohammad Zaher, 34, Ahmad Khaldhadi, 22, and Abdallah Andersen, 32. Riad Anwer Daabas, 19, was acquitted.

Zaher and Khaldhadi, described as the two most active, were each sentenced to 11 years in prison by a three-judge panel, while Andersen was given a four-year sentence. The court ordered Khaldhadi to be expelled from Denmark after he serves his time.

The men went on trial Sept. 5, exactly a year after they were arrested in a sting operation in the central Danish city of Odense involving 400 police officers.

Police said they found a bomb-making manual and a bottle with 50 grams (just under 2 ounces) of triacetone triperoxide, or TATP, in Zaher's home. That explosive was used by the four suicide bombers who killed 52 subway and bus passengers in London on July 7, 2005.

Prosecutors have not said what the intended target was, only that the defendants were planning a terrorist attack in Denmark or abroad.

During the trial, prosecutors presented wiretap recordings of the defendants discussing possible targets, including the Jyllands-Posten newspaper, which published caricatures of the Prophet Muhammad in 2005, the City Hall Square in Copenhagen and the nearby Tivoli amusement park.

The defendants denied the charges and said they were just joking when discussing possible attacks.

"I am really sad" about the outcome, said Hugo Steinmetz, the defense lawyer for Zaher, a Syrian-born Palestinian who came to Denmark in 1998. "The fact that he had the explosives doesn't prove he had the intent to carry out anything."

He did not say whether they would appeal.

Khaldhadi holds Iraqi citizenship but has a residence permit in Denmark. Andersen, a Danish citizen, converted to Islam in 2002.

During the trial, defense lawyers said the men were not serious about the alleged plots, and argued that the police infiltrator tried to encourage them to engage in terrorist activities.

Danish police say they have thwarted a series of terrorist attacks in recent years.

In September, eight people were arrested in what the Danish intelligence said was a crackdown on Islamic militants with links to senior al-Qaida leaders. The suspects were preparing explosives for a planned terror attack, the PET intelligence service said, but did not identify the target.

On Feb. 15, a Danish court convicted a 17-year-old man of involvement in a terror plot uncovered in Bosnia in October 2005.