US teen sticks in chimney 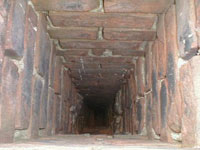 US teen sticks in chimney

A teenager worried about coming in past curfew dived into the chimney, like Santa Claus.

Unfortunately, he did not slide down quite as well as St. Nick.

The 17-year-old boy was trying to sneak back into his room at the Judson Center social services agency Thursday night when he got stuck. A worker at the Center heard moaning and followed the noise to the chimney, authorities said.

Firefighters and police officers had to pull him out.

Police told The Detroit News the teen appeared only to have suffered scratches on his back. He was taken to a hospital as a precaution.