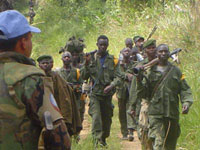 A U.N. military spokesman said a worsening humanitarian crisis in the region has displaced nearly 200,000 people in the past few months.

Army Col. Jean-Claude Mosala said his troops had forced Nkunda's fighters to retreat from Rugari, from where he said the rebels had been firing on passing army vehicles running food and ammunition supplies to government soldiers.

The shelling and machine-gun fire appeared to have stopped by late morning, when dozens of army soldiers could be seen packing up mortar tubes they'd positioned near the main road. Residents said the soldiers had been shelling Nkunda's forces in the hills east of Rugari.

No casualty reports were available, but an Associated Press reporter saw one soldier carrying a wounded comrade on his back, and a military ambulance could be seen leaving the area earlier, headed for Goma.

Congo's government has struggled with little success to establish authority over its eastern regions, particularly the province of North Kivu, where the army and at least three other factions control their own patches of territory, manning roadblocks on dirt tracks that wind through hundreds of steep green hills.

Nkunda defected from the army several years ago and formed his own militia soon after Congo's war ended in 2002, claiming he needed to protect his minority Tutsi ethnic group from Rwandan rebels. The Rwandans have occupied forests in east Congo since fleeing since their leaders helped organize Rwanda's 1994 genocide, in which ethnic Tutsis and moderate Hutus were killed by Hutu extremists.

The latest round of clashes between Nkunda's men and government loyalists erupted in August and have continued sporadically.

Skirmishes in Rugari on Thursday forced hundreds, maybe thousands, of civilians to flee down a main road from Goma though the road was relatively clear of people by Friday.

Army units on Wednesday repelled another attack by Nkunda fighters on a military base in Rutshuru, 18 miles north of Rugari. That attack forced thousands of people in Rutshuru to flee, "many for a second or third time," the U.N. World Food Program said in a statement.

Though most Rutshuru residents have returned, "the constant forced movement is wearing down the survival strategies of a population that is already extremely vulnerable," WFP said.

The fighting has battered impoverished North Kivu, forcing more than 176,000 people to flee in the last several months, according to U.N. figures. The region has been insecure for years, however, and the latest violence has pushed the total number of displaced in the province to around 800,000.