Four neo-Nazis attacked a 17-year-old German girl and carved a swastika into her skin. 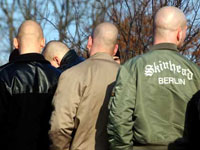 Police were investigating the teenager's allegation that the men attacked her after she tried to help a 6-year-old girl from the former Soviet Union who was being harassed by the group in the eastern town of Mittweida.

The four suspects allegedly threw the teenager on the ground and three of them pressed her down while the fourth one carved a swastika on her hip with a scalpel-like knife, police said.

The incident occurred Nov. 3, but the 17-year-old girl did not immediately report it, police said. The younger girl confirmed the attack, they said.

The identities of the suspects and the two girls were not revealed, and there have been no arrests.

One 19-year-old suspect was briefly detained, then released, police said.

In the eastern German town of Cottbus, meanwhile, a court convicted a far right political activist of using the stiff-armed Nazi salute, which is banned in Germany, and sentenced him to six months in prison.

During the trial, 71-year-old former lawyer Horst Mahler, a strategist for the far-right National Democratic Party, confessed to giving the Nazi salute when he reported to prison a year ago after a conviction in a separate case.

He has appeared in court frequently over the years, and this was his fifth conviction for either displaying banned Nazi symbols or denying the Holocaust, the court said.

In 2003, a Mainz court found Mahler guilty of condoning a crime for saying the Sept. 11, 2001 attacks in the United States were justified and fined him several thousand euros (dollars).