5 dead found in apparent murder-suicide in US park

A woman, three children and a man were found dead in a park in the U.S. state of Maryland in an apparent murder-suicide. 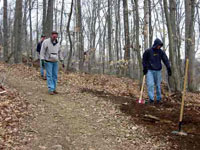 5 dead found in apparent murder-suicide in US park

"It looks like it is a domestic-related homicide-suicide," Montgomery County Police spokeswoman Porsha Jones said of the discovery Thursday night at a small park.

Four of the victims, a woman and three children, were found together at the entrance of the park. Police would not disclose the ages of the children, two boys and a girl, but said they were not toddlers.

Officers searching the area found the body of man who had died of an apparent self-afflicted gunshot wound, police said.

The bodies were being taken to the State Medical Examiner's office for autopsies.

Authorities blocked off roads in the tiny community of Unity, about 25 miles (40 kilometers) northwest of Washington, D.C. The 1.5-acre (0.61-hectare) park is in a sparsely populated area.

There have been several domestic-related killings involving children in Maryland this year.

In March, the remains of four young children were found in their family home in neighboring Frederick. Their father's body was found hanging from a bannister, and their mother remains missing.